The Powerman Zofingen ITU Long Distance Duathlon World Championship has been postponed until May 2021. At this point, I'm not certain that I will make travel grants available again in 2021. Check back in January for an update.
Trans-North Georgia Adventure
Since most races were cancelled this year - and I didn't have to dedicate myself to duathlon, running, road cycling, or anything specific - I decided to have fun, try something totally different and sign up for the Trans-North Georgia Adventure (TNGA) race. I grew up riding mountain bikes in the North Georgia mountains and I was excited to attempt a traverse of the state on two wheels.
If you've never heard of TNGA, it's a 350-something mile route across North Georgia. Depending on who you ask, it has between 35,000 and 50,000 feet of elevation gain. It's roughly 20% single track trail and 72% unpaved. Every year in August, there is a "Grand Depart," where a bunch of crazy people meet on the GA/SC state line and take off heading toward Alabama. James Dunaway holds the course record in something like 43 hours. It doesn't feel quite right to call it a "race." For some, it is a race; but for most it's an adventure or a challenge and they'll take their time with it. There are no awards, a winner is not recognized, but times are posted for comparison.
I'd never attempted anything like it; my longest ride before TNGA was something like 8 hours. Despite my inexperience at long distances, I was sure I had the fitness to do it - and I felt like my years of riding (shorter distances) had prepared me for whatever the route might throw at me. I think I'm a pretty good bike handler, a decent mechanic, I can suffer with the best of them and I can keep a cool head.
So, I bought a hardtail mountain bike in June and put in some long rides around Moscow and the Palouse (a great place to explore by bike). 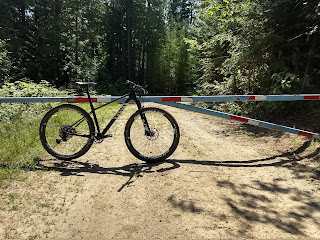 Courtney and I moved out of our place in Moscow in late July and road tripped our way back East to Georgia. On the way we stayed with friends in Helena, MT and Fort Collins, CO. While we were in Fort Collins, I crashed my new hardtail on some rocks and cracked the driveside seat stay. After a day of panic, I ordered a carbon repair kit from Predator Cycling. And a few days later I was letting the epoxy cure on the repaired section of seat stay. I'm really pleased with the repair, but there were a few nervous days there where I wasn't sure if I'd have a bike to ride for the "race."

Since TNGA, I haven't had much to train for. I took a week off and my knee was feeling a lot better. The only race I kind of cared about (Duathlon Nationals) was cancelled last week. Then a few weeks ago, I remembered that the Six Gap Century might still happen. I've known about Six Gap for at least 20 years, but I'd never done it. This year, I finally had the opportunity to ride.
I had some decent prep riding in the hills around Western North Carolina and Eastern Tennessee in the last month and much to my surprise, I had some good interval sessions. I thought, as long as I didn't ride like an idiot, I could do well at Six Gap.
It was a mellow start, mostly easy pedaling until the first test of the day up Neels Gap. A group of two or three got a small gap and I found myself on the front riding tempo up most of the lower half. We crested the top of Neels with a group of 20-25 riders and went on towards the next climb up Jacks Gap. Again, a couple of guys went off the front on Jacks and I bridged across - we rode at a good clip for a few minutes but the pack of 15 or more chased us down before cresting the top.
We hit Unicoi and all rode tempo up. At some point, a car pulled up, said something in Spanish and handed a rider a bottle of water. I gave the universal gesture of "drink" and they handed me a bottle too. Thanks!
Heading to Hogpen, the pace relaxed and guys were resting up for the first timed KOM segment. Jimmy Schurman went off the front early on and I settled into a sustainable 25-30:00 effort (I didn't ride with a power meter). We caught Jimmy in the last 2K and I dropped back to follow any moves. I sprinted away to bag a few seconds as we were coming around the final curve up to the gap.
I got down the backside of Hogpen with a small gap and rode a comfortable tempo. It wasn't long before Jimmy, Ulisses, Giancarlo and Nelson caught up. We mostly worked together, rotating through on the way to Wolfpen.
We hit the start of Wolfpen together and I eased into a steady tempo. Ulisses attacked coming out of the switchback... and for a moment or two he put me on the ropes. But I caught up and did my best to sit on his wheel up to the top. We were rejoined by the three others on the descent and we more or less rode together from there to the finish on wet roads.
I really should have done some recon of the finish. I had no idea how or where it finished. When Ulisses and Giancarlo jumped with 400m to go, I was able to get on their wheels, but I'd already been beaten because as soon as we came out of the last corner, there was the finish line - and I wasn't going to take any unnecessary risks on the wet road in that corner.
So, we went sub-5 hours and I finished 3rd. That was fine. At least I had taken the KOM competiton… Or so I thought! Turns out, some guy who rode the course in over seven hours sandbagged the entire race just to hammer the timed KOM segments. So he took home the KOM jersey... Whatever, man... Congrats.
Worth noting, I took what seemed like a ridiculous amount of carbohydrate during the race - and I felt great. In five hours, I had two GU Stroopwafels, five gels, one and a half bottles of GU Roctane, and a pack of fruit snacks. That's ~280g of carbohydrate in 5 hours. And it made a huge difference. Also worth noting, I rode this race on a pair of wheels that I built myself!

Yeah, good question... I'm looking forward to more running this Fall and Winter. The long distance duathlon championship is in Miami in November. Maybe that'll happen... and maybe I'll be there? Or maybe I'll just take a break from training and get reset for Powerman Zofingen in May.
If you have any ideas, leave them in the comments below!
bikepacking cycling duathlon powerman Zofingen six gap TNGA trans north Georgia

Popular posts from this blog

With respect to exercise, what do you think of when I say, “Lactic Acid?” Legs burning? Acidosis? Horrible stuff that slows me down? Lactic acid and lactate typically get a bad rap from athletes, but what if I said that rather than slowing you down, lactate production enables high-intensity exercise? Well, it does. Lactate vs. Lactic Acid      First, let’s discuss the compound itself. Lactate is not lactic acid. Lactate is a carboxylate, whereas lactic acid is a carboxylic acid. This means the carboxyl group of the lactate molecule is deprotonated and cannot contribute further to acidosis.  The image below shows the difference between the two molecule types.      The reason lactate does not exist as it's protonated acid form in the body is because the pKa of lactate is a low 3.9. This means is that in a solution with a pH higher than 3.9, the compound will exist as the deprotonated carboxylate, lactate.  As shown below, in Table I from Cairns ( 2006 ), the
Read more

Third time's a charm. This is the third time I've sat down to write about Powerman Zofingen. The first time, weeks before the race, I started writing about my goals for the race: A Goal: Podium B Goal: Top 5 C Goal: Top 10 Before I could publish that, I thought I strained my calf - and the whole trip to Europe was in question for about a week.  So, the second time I started writing about Powerman, I was writing about the injury and how sorry I was feeling for myself... Before I could publish that, my calf started feeling a lot better. Now that the race is over, I don't have any excuse not to publish this blog. Brass Tacks I finished 6th in 6:25:52 and I nearly met my "B Goal." I'm very happy with the result - I had a good day out there, but there is room for improvement. Suffering through and finishing the race was immensely satisfying, but the process; the preparation was something more. Link to the results with spli
Read more