September 09, 2019
Leave it to Twitter to get me riled up. A tweet caught my attention a few days ago. It read:

I was intrigued, so I read the abstract. I didn't have access to the peer review journal at the time, but I could see in the abstract, "Between-group fitness and performance were similar after the study."

So I called out the original "tweeter," saying there was no statistically significant difference between the two groups. Claiming one is superior, misrepresents the study's findings. By this point I noticed the individual is a  professor and researcher and maintains a blog devoted to heart rate variability (HRV) research - which surprised me. If he's a professor, surely he understands statistics - I couldn't help but think he was misrepresenting the findings to support his bias in favor of  HRV-guided training...

After I pointed out there was no difference in performance between groups, the tweeter responded with a screen shot of a figure from the paper: 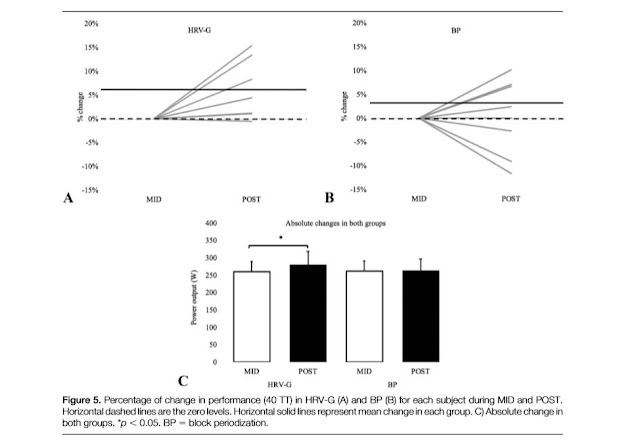 From the figure, yeah - it looks like HRV-guided training does outperform block periodization... but looks can be deceiving. Again, there is no statistically significant difference between the two groups. You can't say that one training method is superior to the other. So that's what I said - Where's the difference?

"One group showed a mean time trial improvement of ~6%, the other, ~3%. If I’m investing the same time and effort into training either way, I’d opt for the method that might give me an extra 3%."

And most people would agree - Who doesn't want an extra three percent?

But it doesn't work that way - we don't know if that 3% difference was due to error or random chance. If the experiment was done again, you may very well find a different result. The difference between the groups was not great enough to be statistically significant. You'd think a PhD educated professor would understand that. And you'd hope he wouldn't misrepresent research to support his own bias for HRV gadgets and training.

This is all public, you can check my Twitter if you have nothing better to do. I don't have any animosity towards the individual, and this is not a critique of HRV-guided or block periodization - I just wanted to take the opportunity to remind people to be critical and don't believe everything that you read.

Popular posts from this blog

With respect to exercise, what do you think of when I say, “Lactic Acid?” Legs burning? Acidosis? Horrible stuff that slows me down? Lactic acid and lactate typically get a bad rap from athletes, but what if I said that rather than slowing you down, lactate production enables high-intensity exercise? Well, it does. Lactate vs. Lactic Acid      First, let’s discuss the compound itself. Lactate is not lactic acid. Lactate is a carboxylate, whereas lactic acid is a carboxylic acid. This means the carboxyl group of the lactate molecule is deprotonated and cannot contribute further to acidosis.  The image below shows the difference between the two molecule types.      The reason lactate does not exist as it's protonated acid form in the body is because the pKa of lactate is a low 3.9. This means is that in a solution with a pH higher than 3.9, the compound will exist as the deprotonated carboxylate, lactate.  As shown below, in Table I from Cairns ( 2006 ), the
Read more

Third time's a charm. This is the third time I've sat down to write about Powerman Zofingen. The first time, weeks before the race, I started writing about my goals for the race: A Goal: Podium B Goal: Top 5 C Goal: Top 10 Before I could publish that, I thought I strained my calf - and the whole trip to Europe was in question for about a week.  So, the second time I started writing about Powerman, I was writing about the injury and how sorry I was feeling for myself... Before I could publish that, my calf started feeling a lot better. Now that the race is over, I don't have any excuse not to publish this blog. Brass Tacks I finished 6th in 6:25:52 and I nearly met my "B Goal." I'm very happy with the result - I had a good day out there, but there is room for improvement. Suffering through and finishing the race was immensely satisfying, but the process; the preparation was something more. Link to the results with spli
Read more